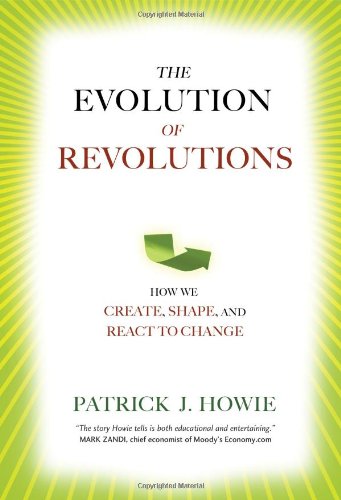 “The Evolution of Revolutions: How We Create, Shape, and React to Change” is a book by Patrick J. Howie.

A well-known academician from Harvard Business School, Howie explores the idea of innovation in his book.
According to Howie, creative destruction is a process by which new ideas, businesses and industries emerge and therefore lead to the downfall of traditional ideas, businesses, and industries. It is a revolutionary process. A revolution is not just a political event, for revolutions occur in all areas, whether in business, politics or science. The revolutionary process, too, is the same for all areas. Revolutions represent a long process — from the initial innovation to the dramatic revolutionary period, through the long post-revolutionary adjustment. At its core, this book is about understanding the process of innovation and how a new idea, product, or service spreads throughout a social system to cause a revolution.
Howie examines three major revolutions: the democratic revolution that began with the American Revolution, the relativity revolution that took hold through Albert Einstein’s theories and the rapid emergence of the World Wide Web as the dominant social force of our time.
The idea that each of these revolutions was the work of a single act of genius or reflected a dramatic leap forward thinking is an unfortunate oversimplification. Each of these revolutions evolved over decades and represented the culmination of a social process. In addition, the revolutionary moment, so often mythicized, is an intermediate step in the process, as the revolution continues well beyond that moment.
According to the author, in any industry there are today multiple revolutions occurring. Granted, some are more significant than others, but innovation and change is occurring constantly. Creating successful innovations is actually very different from merely creating innovations, as the former requires acceptance by a target audience. A critical thesis of this book is that in order for an innovation to successfully cause a revolution, it must pass through three stages: resistance, clarification and elaboration. Failure to pass through each of these stages is what separates a fad from a true revolution.
That new innovations are met with resistance is hardly a novel idea, but the notion that resistance leads to further refinements of the innovation is an often misunderstood element in the transition from innovation to revolution. Despite the efforts of even the smartest people, new innovations almost always have “bugs” that need to be sorted out. This is one reason why it is natural to resist an idea when for the first time it comes to your mind, since it is highly likely there is some problem with it that has yet to be detected. The ability to successfully improve the innovation or, in the rare case when the innovation is correct out of the gate, the ability to provide sufficient evidence that the innovation is fundamentally sound is critical to transforming an innovation into a revolution, which is also called the clarification stage.
The author writes that the ideas behind “The Evolution of Revolutions” follow a path strikingly similar to the book’s core thesis: that a revolution is the result of long developmental evolution, a revolutionary moment, then a long period of further evolution that culminates in a synthesis of the innovation process.