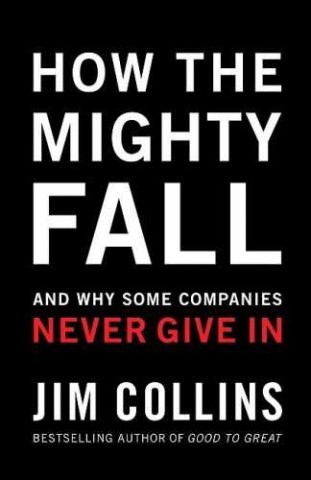 “How the Mighty Fall / Why Some Companies Never Give In” is a groundbreaking book by Jim Collins. Collins is a well-known author; his first work as a co-author, “Built to Last,” became essential reading in the field of management.

In that book, he explained the success principles of century-old visionary corporations. In his second book, “Good to Great,” he revealed the secrets to becoming a great corporation. His latest book, “How the Mighty Fall,” is about how great corporations decline.
He claims that every institution, no matter how great, is vulnerable to decline; and anyone can fall, and most eventually do. According to Collins, the decline is largely self-inflicted, and the path to recovery lies largely within our own hands. The five stages of decline: 1: Hubris Born of Success; 2: Undisciplined Pursuit of More; 3: Denial of Risk and Peril; 4: Grasping for Salvation; and 5: Capitulation to Irrelevance or Death.
Collins says in the first stage, great enterprises can become insulated by success, starting when people become arrogant regarding success and lose sight of the true underlying factors that created success in the first place. The best leaders never presume they’ve reached the ultimate understanding of all the factors that brought them success.
In the second stage, when an organization grows beyond its ability to fill its key seats with the right people, it has set itself up for a fall. Some companies willing to increase revenue try to make undisciplined leaps into areas where they cannot be great or grow faster than they can achieve with excellence. The corporations seeking an unsustainable quest for growth are confusing big with great. Achieving big numbers in sales doesn’t mean that it is a healthy way to grow. Decreasing prices might lead to a bigger market share, but poor customer satisfaction.
In the third stage, Denial of Risk and Peril, companies may face difficult situations, but some leaders can suggest that such troubles or difficulties are “temporary” or “cyclic” or “not that bad.” In Stage 3, leaders discount negative data and amplify positive data. They prefer to blame setbacks rather than accept responsibility. Instead of making little bets and validating an opportunity, they go for big bets and bold goals without empirical validation. Being big never makes one always right; but being big most of the time creates an arrogance that makes one blind. In case of failure, the leaders continue to assume they cannot be wrong and blame others in the organization.
In stage four, Grasping for Salvation, companies find themselves in trouble, and their survival instinct and fear can prompt an overreaction. Instead of being calm they panic and grasp for salvation. Common “saviors” include a charismatic visionary leader, a radical transformation, a dramatic cultural revolution or any number of other silver-bullet solutions. It is necessary in hard times to be calm, clear-headed and focused. If you want to reverse a decline, be rigorous about what not to do. Initial results from taking dramatic action may appear positive, but they do not last. One of the symptoms of this stage is chronic restructuring.
In the fifth stage, Capitulation to Irrelevance or Death, accumulated setbacks and expensive false starts erode financial strength and individual spirit to such an extent that leaders abandon all hope of building a great future. In some cases the company’s leader just sells out; and in the most extreme cases the enterprise simply dies outright.
In conclusion, Collins claims that the point of the struggle is not just to survive, but to build an enterprise that makes a distinctive impact on the world it touches. To accomplish this requires leaders who retain faith that they can find a way to prevail in pursuit of a cause larger than mere survival. In my personal conclusion, arrogance leads everyone to decline, and it shuts the mind’s and heart’s eye; and without vision, a big crash is inevitable. It is like a blind pilot trying to fly a plane.